LavinMQ implements an extension of the open standard AMQP 0.9.1 specification. It is the protocol used as the basis for a set of standards controlling the entire message passing process.

What is the Advanced Message Queuing Protocol?

AMQP is a protocol for message-oriented middleware.

When should I use AMQP?

AMQP is an efficient and reliable messaging protocol that can be used to build robust, cross-platform, messaging applications. Use an AMQP message broker in a situation where you need secure and fast message delivery between your client and the message broker.

AMQP features message queuing and orientation, similar to other message queuing protocols. Routing is another feature and is basically the process by which an exchange decides which queues to place your message on. Messages in LavinMQ are routed from the exchange to the queue depending on exchange types and keys. Key features of AMQP include reliability and security.

AMQP is a binary protocol, suitable for large amounts of data. It is optimized for machine efficiency and speed instead of human readability. Another valuable characteristic of the AMQP protocol is that it has multiple implementation standards, meaning that you can run AMQP with various message brokers and applications.

Typically, one client called the producer sends a message to an exchange. Exchanges then distribute messages and message copies to queues, depending on rules defined by the exchange type and routing key provided in the message. The message is finally consumed by a subscribing service. 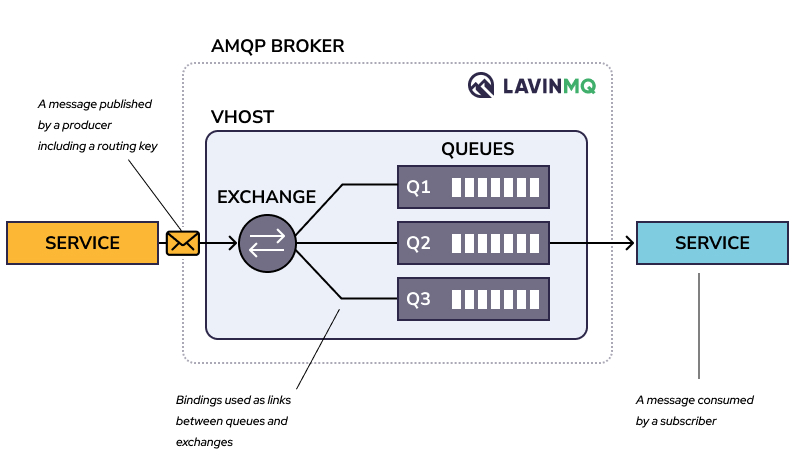 Providing a place to store messages, a queue acts like a buffer. Messages can be consumed from this queue. A queue can be declared with a number of attributes during creation. For instance, it can be marked as durable, auto-delete, and exclusive, where exclusive means that it can be used by only one connection and this queue will be deleted when that connection closes.

A channel routes messages to a queue depending on the exchange type and bindings between the exchange and the queue. For a queue to receive messages, it must be bound to at least one exchange. LavinMQ provides four main exchange types - direct exchange, fanout exchange, topic exchange, and header exchange. An exchange can be declared with a number of attributes during creation. For instance, it can be marked as durable so that it survives a broker restart, or it can be marked as auto-delete meaning that it’s automatically deleted when the last queue is unbound. A binding is a relation between a queue and an exchange consisting of a set of rules that the exchange uses (among other things) to route messages to queues.

A message is an entity sent from the publisher to the queue and finally subscribed to by the consumer. Each message contains a set of headers defining properties such as life duration, durability, and priority.

AMQP 0.9.1 also has a built-in feature called message acknowledgment that is used to confirm message delivery and/or processing.

A connection in AMQP 0.9.1 is a network connection between your application and the LavinMQ server, e.g. a TCP/IP socket connection.

A channel is a virtual connection inside a connection, between two LavinMQ (AMQP) peers. Message publishing or consuming to or from a queue is performed over a channel. One single connection can have multiple channels.

Virtual hosts (vhost) provide a way to segregate applications in the broker. Depending on the vhost, different users can have different access. Queues and exchanges are created so they only exist in one vhost.

AMQP 0.9.1 provides a number of methods or operations that can be performed. Some examples of AMQP methods are opening a channel, declaring a queue, or deleting an exchange (channel.open, queue.declare or exchange.delete-ok).

Other information is passed in the body and is referred to as application data. The message body will be located here. Application data may take any form or encoding.