Messages sent to a consistent hash exchange are distributed among bound queues, depending on the hash of the routing key or a header value. The consistent hash exchange also ensures that messages with the same computed hash end up in the same queue. This allows for all messages of the same character, e.g. the same booking or client id, to end up in the same queue. This can ensure a causal message order of events that relies on consistency for that specific ID assuming no bindings have changed.

What is Consistent Hash Exchange?

The consistent hash exchange is an exchange type available in LavinMQ. It distributes messages among queues bound to it, while still ensuring that messages of a certain character are sent to the same queue, assuming no bindings have changed.

With consistent hash exchange, the broker itself is used as the unit of parallelism instead of the consumers.

When should I use Consistent Hash Exchange?

The consistent hash exchange can be used to load-balance messages between queues when causal message ordering is still needed. Manually distributing messages can be hard, since publishers aren’t connected with the information about the number of queues and bindings.

LavinMQ distributes messages in sequential order, but to avoid long queues, data is often spread among multiple queues or handled by several consumers. Although, data that are evenly distributed over multiple queues might lose the order.

With Consistent Hash Exchange, the hash of the routing key or the header values on the messages determines the destination queue. All queues bound to the exchange are potential destinations.

The process where data is distributed to a certain location using a hashing algorithm is known as consistent hashing. Only the hash can be used to determine exactly where that data should be routed. This location hashing is usually termed a “ring”, or “hash ring”.

Any other possible input is mapped to some number within that range. There are many more possibilities when it comes to inputs than outputs, so for this reason, many different strings can be mapped to any given number. Input values, therefore, are evenly spread as much as possible over the range of outputs.

The hash can be distributed over a specified span among an interval, into buckets, which makes it easy to add or remove more bounded queues into the exchange. The figure below shows how messages with given ClientIDs as routing keys are distributed among buckets, depending on the number of queues and their values. 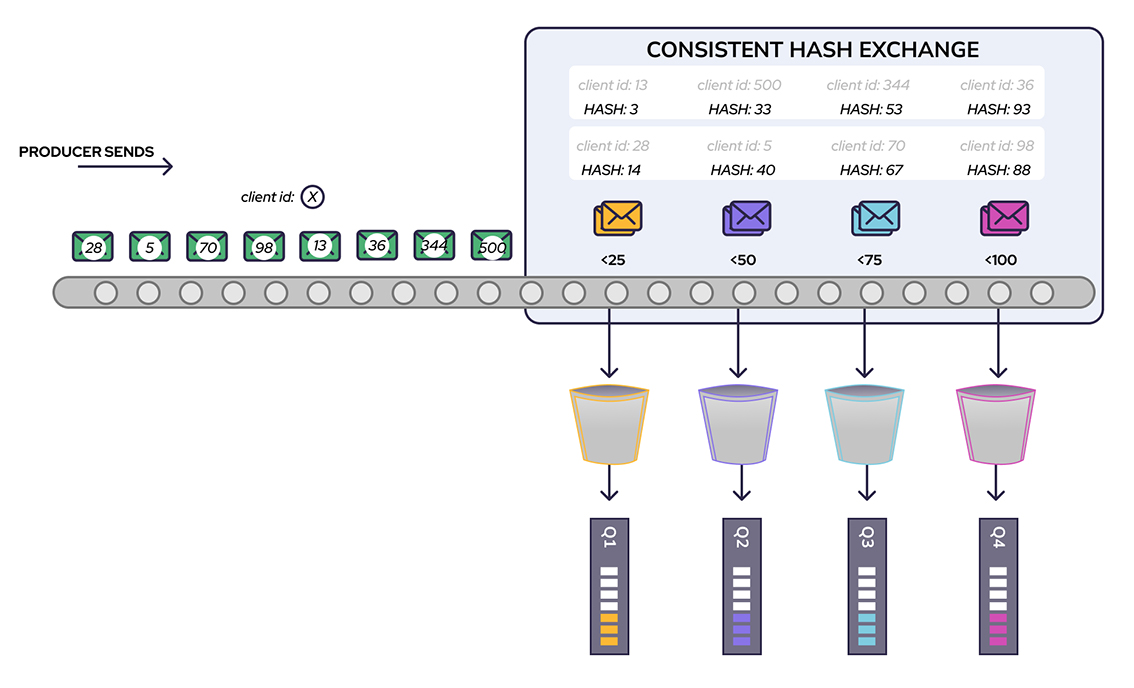 The image illustrates messages routed by the Consistent Hash Exchange by their hashed routing key.

Setting up a consistent hash exchange is as easy as setting up an exchange:

Messages that are unable to be consumed for some reason will only be resent to their given queues and be requeued according to configurations like TTL and x-delivery-count. If the system suffers from consumer failures, the messages will stay in the queue until the given consumer/consumers are ready to handle messages.

Removing or adding queues with consistent hash exchange for LavinMQ

The example below has a binding key of 1, meaning that one queue has one bucket:

Below is an example with a routing key on the binding of value 2.

Adding a queue will affect the message distribution over some linked queues, since the span changes. The same scenario applies to removing queues.

Once a new queue is created, it needs to be added into the full span which will move them around a bit. This might cause messages for a given routing key to end up in another queue than before:

The example below is a new queue added between 75 and 85.

How much the queue will be affected can be controlled by the setting of the required number on the routing key on the binding. A lower number will aim for keeping the message ordering, since they end up in the same queue, but can cause more uneven distribution. A higher number makes the distribution more even between queues but a message with a given ID is more likely to be routed to a different queue than all other messages with the same ID when adding or removing queues to the exchange since the span will change.

Adding one more queues with routing keys on the binding keys equal to 2 will look similar to the example below - the queue is added in two places:

One Queue per customer Use case

When you add more consumers for a queue to go faster you never know which consumer gets what messages, it might be that messages related to one customer end up in different consumers every time. Instead, by routing the message for a specific customer to one queue, you can be sure that the consumer on that queue will always get ALL the messages for that customer.